Today we are going to talk about the world of advertising. We are all consumers and in the current society we are invaded by hundreds and even thousands of daily advertising impulses: the radio when we go on the car to work, the newspaper when we stop to have a coffee, the billboard in front of the office, the flyer you get in hand, the markers with sales and promotions in the supermarket, the TV when you get home … and even Facebook when you are connecting at night before going to bed.

All these stimuli, in addition to those we receive normally in our day-to-day (traffic lights, greetings from other people, a pothole that we must avoid, a signal that we do not want to crash with …) causes we pay less attention to advertising, no matter how invasive it is, we directly ignore it.

In this situation, there are few companies that have chosen to carry out very aggressive advertising strategies. Here we have many examples on the Internet where we can see web pages inflated banners, sliders or pop-ups that appear and disappear, etc. 🙁 No, we don’t like it … the same we didn’t like when our mother cooked spinach mixed up within the main dish of the lunch (hehe).

For these reasons, advertising and branding communication should focus on what really matters: people. At the end of the day, advertising is a tool that a brand used to transmit a message, if you do it wrongly and aggressively, I will think that you are a “tiresome” brand but if you do it right, offering me things I like, you could make me get interested and even you could remain in my head when I need something from your business field.

So today I want to bring an example of communication of a brand that, adapting to the culture of the target audience and playing with identifying elements of the environment, has managed to attract the attention of consumers and become part of their talking in a positive way .

This is Apple. Until a few years ago, when they opened their stores they covered them with a black mural and only the Apple logo. Well, they thought they could improve the aesthetics and please the target audience of the area by adapting to their culture and tastes. Today we have different examples, the first is the opening of the Apple Store in Barcelona where they created a modernist mural inspired by the mosaics we can see in the Parc Güell 🙂 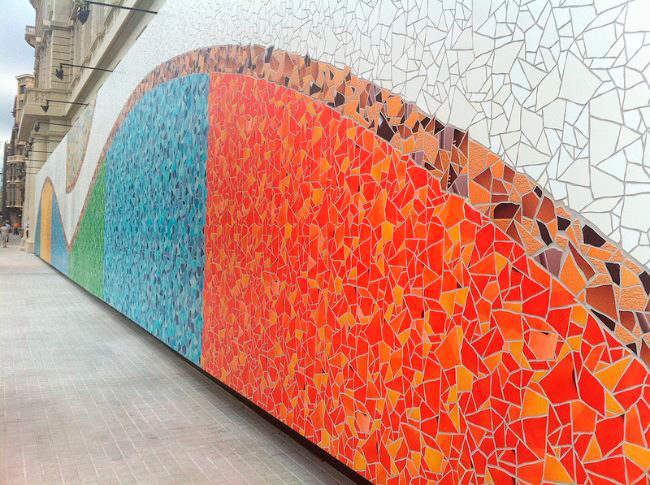 This other, in Hangzhou (China), features a mural created by a major modern calligrapher who presented a poem written 2000 years ago in which the importance of the city was celebrated.

And also in China last year, in Chongqing, Apple gathered a photographer and a painter together to create a mural to represent this city and the lifestyle of its people. You can see the making off video where they explain the details.

As you can appreciate, a simple mural is a basic element of communication but, well used, can be very useful for the company’s appearance to show their values and make us perceive, as in this case, they thought about the audience they targeted, with their characteristics and then they adapted to it. Because, as in the Design Thinking, advertising (and almost all fields), the center of our work should be the PEOPLE 🙂